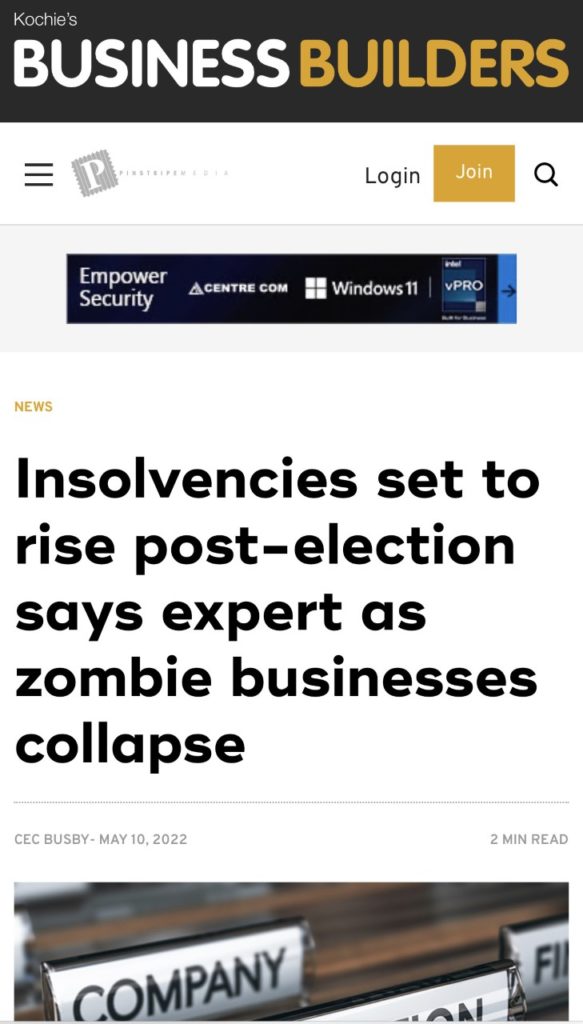 Their mission is to INSPIRE, EDUCATE and ADVOCATE for the nation’s two-million-plus small business owners by providing content that shares their successes, keeps them up to date with the latest news and spotlights their issues.

Read what Kochie’s Business Builders said about the state of the market, and the quotes from Insolvency Australia.

“The pandemic is continuing to impact small businesses in Australia with an insolvency expert predicting thousands of businesses will fold in the coming months.

Gareth Gammon, Director, Insolvency Australia says the first wave of insolvencies is likely to occur after the election and tax season. Gammon predicts it won’t just be zombie businesses that call it a day but an increasing number of legitimate businesses, that have been doing it tough for the past twelve months.

“I’m hearing from Insolvency Australia members that there will also be an increase in ‘legitimate’ trading companies seeking insolvency or restructuring support, particularly those that have exhausted their cash reserves and are getting knocked back for funding or forbearance,” Gammon said.

Government support during the pandemic has allowed a number of businesses to stay afloat – but as support winds back, some businesses are finding they are no longer viable. Financial instability and changing social situations post-COVID are impacting many.

“After two years of ‘limbo’ for the insolvency sector, we are seeing a rising number of external administrations and while the levels have not yet returned to normal, there’s an expectation that will occur over the next 18 months or more,” Gammon commented.

The special pandemic laws that protected businesses from insolvency are no longer in force, meaning the ATO and creditors can now collect outstanding debts. Inflationary pressures and election jitters are also contributing to rising tension.

“March ABS figures show, with almost a quarter of businesses expecting it to be difficult or very difficult to meet their financial commitments over the next three months, it really reinforces the myriad pressures directors are under.”

In a recent straw poll of members (Registered Liquidators and Bankruptcy Trustees), Insolvency Australia found that most believe there will be a rise in insolvency matters, starting in July and then later in the year after the effect of interest rate rises and inflation will bite.

The sectors most under pressure include hospitality, due to likely restrictions on consumer discretionary spending, and building and construction, due to labour shortages and an increase in costs on fixed-price contracts.

Bob Jacobs, head of insolvency specialist Auxilium Partners says businesses in these sectors have been struggling for some time and are often asset-poor.

“Unfortunately, such businesses are least likely to have real assets to sell to pay creditors. he said.

“The earlier company directors seek specialist advice from ASIC-registered liquidators, the more likely they are to avoid liquidation. Their business may only require administration and restructure. Also, beware of financial strategies suggested by pre-insolvency advisers who are not registered with ASIC,” he said.