Zombies lead the insolvency march in second half 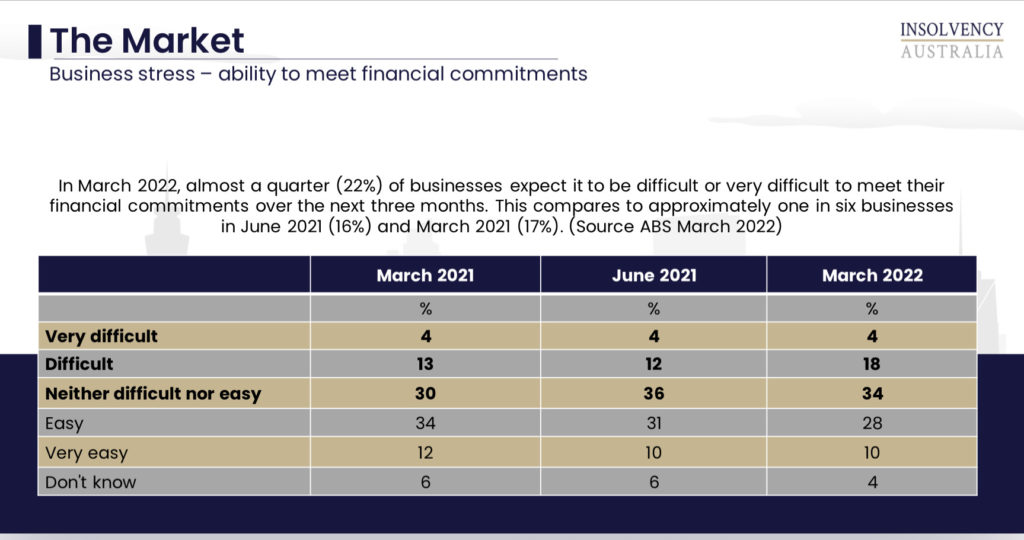 Zombies lead the insolvency march in second half

Zombie companies will be leading the insolvency charge over the next 12 months. And the ‘first wave’ is likely to occur after the federal election and tax season, says Insolvency Australia, the independent marketplace for insolvency services.

Gareth Gammon, Insolvency Australia Director, said a rise in business insolvencies is likely in the third and fourth quarters, with zombies at the forefront. “However, I’m hearing from Insolvency Australia members that there will also be an increase in ‘legitimate’ trading companies seeking insolvency or restructuring support, particularly those that have exhausted their cash reserves and are getting knocked back for funding or forbearance.

“After two years of ‘limbo’ for the insolvency sector, we are seeing a rising number of external administrations and while the levels have not yet returned to normal, there’s an expectation that will occur over the next 18 months or more.”

Insolvency Australia member Bob Jacobs, head of Auxilium Partners , says: “The first to fall are businesses which are no longer viable due to social changes post-COVID, or intrinsic financial instability deferred by COVID. Major reasons for that are: firstly, government support during COVID put many unviable companies into a holding pattern; and, secondly, the special pandemic laws that prevented insolvency are no longer in force, meaning the ATO and creditors can collect outstanding debts.”

Gammon points to key triggers including the ATO ramping up debt collection, inflationary pressures, and jitters around the election. “And as March ABS figures show, with almost a quarter of businesses expecting it to be difficult or very difficult to meet their financial commitments over the next three months, it really reinforces the myriad pressures directors are under.”

In a recent straw poll of members (Registered Liquidators and Bankruptcy Trustees), Insolvency Australia found that most believe there will be a rise in insolvency matters, starting in July and then later in the year after the effect of interest rate rises and inflation will bite.

Nick Cooper, Managing Partner of Oracle Insolvency Services and an Insolvency Australia member, predicts an increase in insolvency work “closer to the 12-month mark than six months. There will be increases in both corporate and personal insolvencies – but bankruptcies tend to lag behind business failures by around 12-18 months,” he says.

The most significant trigger points, he agrees, will be the ATO’s collection action, rising inflation, rising interest rates and any change in the federal government. “The sectors most under pressure include hospitality, due to likely restrictions on consumer discretionary spending, and building and construction, due to labour shortages and an increase in costs on fixed-price contracts,” Cooper says.

Bob Jacobs adds that in addition to the building sector, he’s seeing earlier business failures in the healthcare, social assistance, retail shopfront traders, tourism, hospitality and contracting sectors. “Unfortunately, such businesses are least likely to have real assets to sell to pay creditors. A slower economic recovery due to new COVID variants, and bottlenecks in the supply chain will continue to bring about an interesting mix of insolvencies,” he says.

And he provides some strong advice for businesses in financial distress: “The earlier company directors seek specialist advice from ASIC-registered liquidators, the more likely they are to avoid liquidation. Their business may only require administration and restructure. Also, beware of financial strategies suggested by pre-insolvency advisers who are not registered with ASIC.”

Launched in March 2021, Insolvency Australia is Australia’s first and only insolvency comparison site. It enables business owners and directors, individuals, and advisers to search for, compare and connect with Registered Liquidators and Bankruptcy Trustees around Australia. The service is independently owned and is free for site users seeking advice.